[Winston-Salem, North Carolina, Tuesday, May 28, 2019]
Dummit Fradin litigation attorneys recently won a high profile trial against mainstream rapper Yo Gotti. Yo Gotti, aka Mario Mims, was slapped with a hefty $2.2 million verdict in a North Carolina courtroom today. The amount was then tripled by a Forsyth County judge to $6.6 million because of a finding of unfair and deceptive trade practices.

In 2016, Yo Gotti recorded a verse for Young Fletcher. Young Fletcher, aka Lamont Fletcher, is a local North Carolina rapper who hoped to “jump start” his career with the release of this collaboration.

Yo Gotti received $20,000 for the recording, but never got approval from his label Epic Records. Nor did he provide the required “side artist agreement” which would have allowed Young Fletcher to release the song. Yo Gotti then tried to go around Young Fletcher’s manager, Michael Terry, and steal the artist by offering a back-door deal.

Yo Gotti is a rapper from Memphis, Tennessee who has been recording music since the 90s. He’s helped other local artists rise to fame by contributing verses like he agreed to do with Young Fletcher. Unfortunately, Yo Gotti did not follow through. Instead, he evaded many communication attempts from Young Fletcher and Michael Terry.

“Yo Gotti didn’t realize who he was dealing with,” said plaintiff Michael Terry, a talent manager, and promoter in Winston-Salem. Michael manages Young Fletcher and put up the $20,000 for the Yo Gotti vocals.

According to Clarke Dummit, who represents Mr. Terry in the lawsuit, the verdict was a long time coming. “It took us several years to pin Yo Gotti down, and now we’ll go after the homes and the cars.” 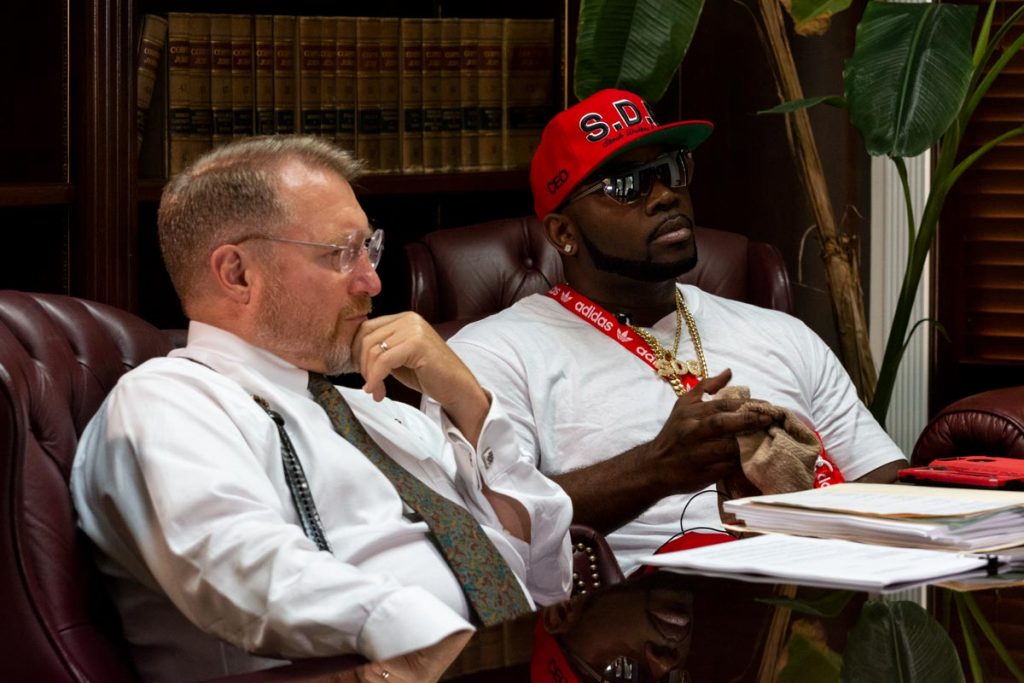 Attorney Clarke Dummit and plaintiff Michael Terry sit down with WFMY News 2 to discuss the Yo Gotti lawsuit.

Because Yo Gotti was so evasive and efforts to resolve the matter were ignored, Clarke Dummit arranged to have the rapper personally served last year by a Forsyth County sheriff while Yo Gotti was performing as a headliner in Winston-Salem.

But that was apparently not enough to get his attention, says Clarke Dummit. Perhaps this verdict for damages will. “He might want to pick up the phone now,” said Mr. Terry, “because I’m coming after the cars and the Bel Air mansion.”

“It was a truly interesting experience to learn about our Mr. Terry and his career in the music industry. I am very excited that Mr. Terry received the outcome he deserves and it is a rewarding experience to be able to help Dummit Fradin deliver this judgment,” commented Brett Moore, a High Point attorney who assisted with the trial.

“What I love about this firm is that we are ready for anything. Sure, we focus on criminal law, domestic and immigration, but if a client comes in with an issue in another area of litigation, which is what happened with Mr. Terry, ‘We have an attorney for that.’ When our team gets hold of a case, everyone dives in with everything they have, and the result speaks for itself,” says Abigail Seymour, a former Dummit Fradin attorney who assisted in the trial.